What Books to Read with Disability Representation for February 2020

Check out these seven books published in February 2020 with disability representation, and if you’re looking for more from this year, here’s my roundup from January.

This textbook is an excellent introduction for college students studying education. New to this edition are reflections on recent research, more diverse collaborators, additional chapters on reading and math, and more coverage of students with an autism spectrum disorder, and more discussion of how technology can be effectively used for disabled students. It’s also a good reference book.

Get a Grip, Vivy Cohen by Sarah Kapit

It’s very hard to find own voices representation of autism, and autistic characters are all too frequently stereotyped in fiction by non-autistic writers, which the author of this book, Sarah Kapit, writes about in an interview on Nerdy Bookclub. That’s one reason why I highly recommend Kapit’s debut novel, Get a Grip, Vivy Cohen, about an autistic girl who just wants to play baseball, except her mother doesn’t think she can handle it. It’s inspired by Kapit’s childhood as an autistic kid who loved baseball. It’s written in letters and emails and is a fun and accessible read.

Being Heumann: An Unrepentant Memoir of a Disability Rights Activist by Judith Heumann and Kristen Joiner

Judith Heumann is an international disability rights activist who helped draft the legislation that would become the Individuals with Disabilities Education Act Individuals with Disabilities Act, co-founded the World Institute on Disability, has served as a disability rights representative for both President Clinton and President Obama, among many other important contributions to disability activism. This memoir chronicles her life from infancy–when she became paralyzed after contracting polio at 18-months-old–to when she led the longest sit-in and takeover of a government building in U.S. history, pressuring the Carter administration to implement protections for disabled people that eventually led to the Americans with Disabilities Act.

The Illness Lesson by Clare Beams

Content Warning for sexual abuse. After the Civil War, a remote school for girls opens, founded by philosopher and scholar Samual Hood. His daughter, Caroline Hood, teaches English literature. The school’s aim is to prove to the world that girls can learn in the same manner as boys, but when one by one the students fall ill to a mysterious illness, the choice Samuel makes, overriding the concerns of Caroline, shows that while the girls may be capable of the same intelligence as boys, their bodies are not their own in the same way. This is an immensely disturbing but riveting book about how women’s health concerns are often dismissed by doctors.

This picture book is based on author Sarah Fischer’s life. It’s about a little girl who worries she won’t be able to play basketball after becoming paralyzed from the waist down. But thankfully the local mall introduces her to wheelchair basketball, and she can play the sport she loves once more.

I like that this young adult fantasy debut has disability representation right on the cover. It’s about a group of teens who become trapped inside their fantasy MMORPG after a glitch in the software. It’s a fun fantasy adventure.

The Good Hawk by Joseph Elliott

I missed this middle-grade fantasy last month, so I’m including it in this month’s roundup. It’s an epic fantasy about a girl with Down’s syndrome who can communicate with animals. She and another boy from her clan team up to save their clan after they’ve been captured by enemy forces. Elliott was inspired to write a character with Down’s syndrome after working as a teaching assistant in a special education school.

Margaret Kingsbury writes about disability representation, fantasy, science fiction, and fairy tales for Book Riot, The Bronzeville Bee, Star Trek, and more, and she’s co-creator of Baby Librarians where she, a friend, and their children write about the children’s books they love. Her fairytale fiction has been published in Nonbinary Review, Devilfish Review, and Expanded Horizons, among other places. She lives in Nashville, TN with her husband, daughter, and their many, many books. Find out more on her website and follow her on Instagram @babylibrarians or Twitter @areaderlymom

Photo by Darwin Vegher on Unsplash 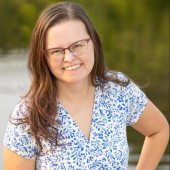 Open Your Wings and Fly: A Letter To Sabrina’s Sister

A Proposal to Revolutionize Inclusion

Broaden the focus of autism to include non-binary genders